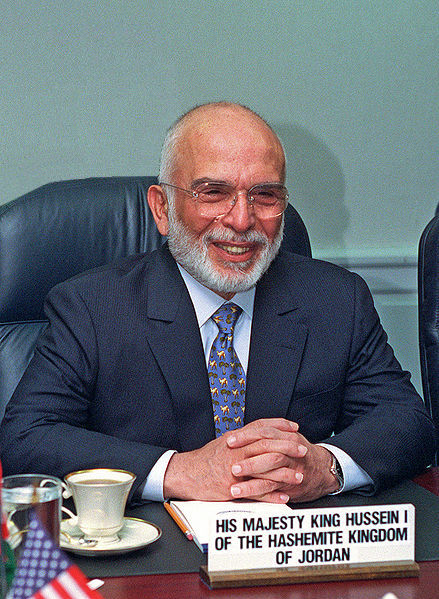 I recently read a story about King Hussein bin Talal of Jordan who showed great humility after what was known as the Island  of Peace massacre in 1997.

A group of 80 Israeli schoolgirls from Beit Shemesh, 20 miles west of Jerusalem, were on a field trip to the Jordan Valley and were visiting the Island of Peace park on Thursday, March 13, which was under Jordanian rule.

A Jordanian border guard opened fire on the girls, killing 7 and wounding 5 or 6 others, including a teacher. The border guard was subdued by other Jordanian soldiers on the scene. The girls who were killed were only 13 and 14 years old.

The following Sunday, March 16, King Hussein flew to Israel and visited the homes of each of the victims, who were in mourning (shiva). He reportedly knelt before the parents, begging their pardon and asking forgiveness. Among other things he said, “I feel as if I have lost a child of my own. If there is any purpose in life it will be to make sure that all the children no longer suffer the way our generation did.”

This act of deep humility was remarkable and well received by the victims’ families. Some mocked him, but it as an incredibly wise, courageous, and timely act. It seems to have avoided more open conflict between the countries.

Recently, as I have struggled with conflict, the Lord has whispered this instruction in my ear, “Be humble. You will win by humility.” I believe those words whole-heartedly. King Hussein was a living example of them.

2 thoughts on “The Humility of King Hussein”