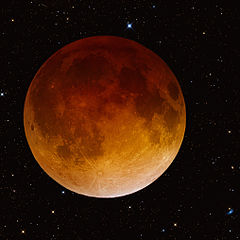 September 2015 will be an interesting month. Several astronomical events will fall on the same days as holy days on the Hebrew calendar. I’ll let you decide if these events are significant in regard to the Last Days or not. Let’s take a tour of the month and see what will happen.

Rosh Hashanah (ראש השנה) or Jewish New Year is also known as the Feast of the Trumpets. It begins at sundown on Sunday, September 13, 2015. It occurs on the first two days of the month Tishrei, which is the seventh month of the Jewish calendar. Lenet Hadley Reed wrote an article entitled “The Golden Plates and the Feast of the Trumpets” in the January 2000 Ensign. I recommend it.

The days between Rosh Hashanah and Yom Kippur are called the Days of Awe. A partial solar eclipse will occur on September 13, 2015, though it will be visible in certain areas of the southern hemisphere.

The shemitah (pronounced schmee-ta) is the seventh or sabbatical year, a year of rest for the land according to Exodus 23:10–11:

And six years thou shalt sow thy land, and shalt gather in the fruits thereof: but the seventh year thou shalt let it rest and lie still; that the poor of thy people may eat: and what they leave the beasts of the field shall eat. In like manner thou shalt deal with thy vineyard, and with thy oliveyard.

Some controversy exists about when the next sabbatical year will fall, but according to the Encyclopaedia Judaica, Second Edition ([Thomson Gale, 2006], 623–628), the shemitah began in 2014 and will end this year. (See Leviticus 25:1–7, 18–22; Deuteronomy 15:1–6; also see the entry on the sabbatical year in the Bible Dictionary.)

After seven times seven years comes the fiftieth or jubilee year (see Leviticus 25:8–17; see also the Bible Dictionary entry on the jubilee year). Some believe that 2015/2016 will be the 70th jubilee year since the nation of Israel entered the land of Canaan. However, there is much dissension about calendar dates so I will not go out on a limb here.

The Day of Atonement

Yom Kippur (יום הכיפורים) or the Day of Atonement begins at sundown on Tuesday, September 22, 2015. For Jews, it is the holiest day of the year, a day of fasting, prayer, and repentance.

Joseph Smith received the plates of gold from the angel Moroni 188 years ago on this day; however, September 22, 1827, fell on the same day as the Rosh Hashanah or the Feast of Trumpets that year.

The Feast of the Tabernacles

The dates of the holy days and the eclipses are astronomical certainties. The Lord gave the “lights in the firmament . . . for signs, and for seasons, and for days, and years” (see Genesis 1:14) so there may be significance to these phenomena. But the dates for the shemitah and jubilee are not so certain. When someone makes bold claims as to the exact date of a prophesied event, well, I am careful not to board a train for which God has not given me a ticket. But it’s always good to be aware and watching. As the Savior warned, “Watch therefore: for ye know not what hour your Lord doth come” (Matthew 24:42).