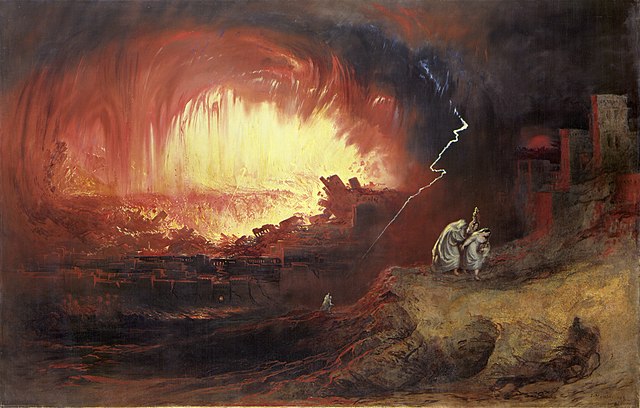 Sometime before His Olivet discourse, which He gave only days before His death, the Savior prophesied of His Second Coming in Luke chapter 17:

And as it was in the days of Noe, so shall it be also in the days of the Son of man. They did eat, they drank, they married wives, they were given in marriage, until the day that Noe entered into the ark, and the flood came, and destroyed them all. Likewise also as it was in the days of Lot; they did eat, they drank, they bought, they sold, they planted, they builded; but the same day that Lot went out of Sodom it rained fire and brimstone from heaven, and destroyed them all. Even thus shall it be in the day when the Son of man is revealed. (Luke 17:26–30; emphasis added.)

As it was in the days of Noah, as it was in the days of Lot, so will it be when the Son of God returns again to earth. It seems that day will be a scene of sudden, mass destruction. Why? I’ll explore what happened to Lot and his family. It’ll give us an idea of what might happen on the “great and dreadful day of the Lord” (Malachi 4:5).

Lot Moves into a Bad Neighborhood

Before Sodom was destroyed, Abraham and Lot, Abraham’s nephew, lived near Bethel and Ai, probably about 15 to 20 miles (24 to 32 kilometers) north of Jerusalem. Between them they owned a lot of livestock and they couldn’t live near each other without their herdsmen arguing, so Lot and his family departed to the east, to the fertile, alluvial plain near the city of Sodom. This area was likely just northeast of the Dead Sea (also called the Salt Sea).

Lot was in for a little trouble though because “the men of Sodom were wicked and sinners before the Lord exceedingly” (Genesis 13:13).

In time, holy men came to Abraham and Sarah to tell them of the birth of Isaac, and as the men departed, the Lord revealed his intentions for Sodom to Abraham:

And the Lord said, Because the cry of Sodom and Gomorrah is great, and because their sin is very grievous; I will go down now, and see whether they have done altogether according to the cry of it, which is come unto me; and if not, I will know. (Genesis 18:20–21; emphasis added.)

Abraham reasoned with the Lord, pleading that He spare the cities if only ten righteous people were there. The Lord promised that He would not destroy them for the sake of ten. Nevertheless, in the end, the cities were not spared.

When two angels arrived in Sodom, they stayed in Lot’s house. I’ll rely on the New International Version to tell us clearly what happened next.

Before they had gone to bed, all the men from every part of the city of Sodom—both young and old—surrounded the house. They called to Lot, “Where are the men who came to you tonight? Bring them out to us so that we can have sex with them.” Lot went outside to meet them and shut the door behind him and said, “No, my friends. Don’t do this wicked thing. . . . [can’t bear to leave in the part about Lot’s daughters] Don’t do anything to these men, for they have come under the protection of my roof.”

“Get out of our way,” they replied. “This fellow came here as a foreigner, and now he wants to play the judge! We’ll treat you worse than them.” They kept bringing pressure on Lot and moved forward to break down the door. But the men inside reached out and pulled Lot back into the house and shut the door. Then they struck the men who were at the door of the house, young and old, with blindness so that they could not find the door. (NIV Genesis 19:4–11.)

Jude, who was likely Jesus’s younger brother, wrote in his epistle that:

Sodom and Gomorrah and the surrounding towns gave themselves up to sexual immorality and perversion. They serve as an example of those who suffer the punishment of eternal fire. (NIV Jude 1:7.)

But immorality and perversion weren’t Sodom’s only sins. The Lord also condemned Jerusalem by the mouth of Ezekiel the prophet, comparing her to Sodom:

Thy younger sister, that dwelleth at thy right hand, is Sodom and her daughters. Yet hast thou not walked after their ways, nor done after their abominations: but, as if that were a very little thing, thou wast corrupted more than they in all thy ways. As I live, saith the Lord God, Sodom thy sister hath not done, she nor her daughters, as thou hast done, thou and thy daughters. Behold, this was the iniquity of thy sister Sodom, pride, fulness of bread [overeating], and abundance of idleness [unconcerned, perhaps lazy or apathetic] was in her and in her daughters, neither did she strengthen the hand of the poor and needy. And they were haughty, and committed abomination before me: therefore I took them away as I saw good. (Ezekiel 16:46–50; emphasis added.)

Lot tried to warn his sons in law, but they thought he was full of beans. When Lot lingered the next morning, the angels took Lot and his family by the hand and (“set”) them outside the walls of the city. After they entered the nearby village of Zoar (Bela), “the Lord rained upon Sodom and upon Gomorrah brimstone and fire from the Lord out of heaven; and he overthrew those cities, and all the plain, and all the inhabitants of the cities, and that which grew upon the ground” (Genesis 19:23–25).

When Lot’s wife looked back at the destruction, which she had been forbidden to do, she was reduced to a pillar of salt.

In his testimony to His disciples, Jesus warned: “Remember Lot’s wife.” What should we remember about her? Against the counsel of angels, she looked back. She chose her own way and suffered the fate of those who remained in the city.

I don’t know precisely what happened to Lot’s wife, but I have a suspicion that she not only looked back, she actually turned back and placed herself within the sulfuric strike zone. What was she after? I don’t know. But this we do know: she brought her punishment upon herself. (Jeffrey R. Holland gave a wonderful devotional at BYU entitled “Remember Lot’s Wife.” Recommended reading.)

What Can We Learn from This Story?

Heed the warnings of the holy prophets, warn others to flee from sin, flee from sin ourselves, and don’t look back.

One Last Word: Where Was Sodom?

The archeologist Steven Collins believes that Tall el-Hammam, just northeast of the Dead Sea, is a geographical and archeological match for the site of ancient Sodom. He has been excavating the tell since 2005 and has discovered a thick layer of ash and other evidence that the city was exposed to a sudden, intense heat reaching 2,000 degrees Fahrenheit. After the city was destroyed, the location was uninhabited for some 700 years. We can’t be certain that Tall el-Hammam is the same place as Sodom as there are arguments against it, but I believe it might just be the place.