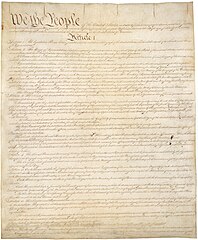 The Prophet Joseph Smith prophesied that the day would come when the Constitution of the United States would be in great jeopardy. (I am not speaking of the White Horse Prophecy but of other, historically reliable statements made by the Prophet and others.) I see this event as one of the signs of the Second Coming.

I believe that the Constitution of our land is a living document and that it may be adapted and has been adapted according to the voice of the people. There are provisions in the Constitution itself for making such changes. Those kinds of changes—the kind that follow due process—don’t trouble me.

How and in what way the Constitution of the United States will be pushed to the brink, I won’t venture to guess; however, I have watched with interest the administrative and judicial challenges to the Constitution that have arisen in recent years. No doubt we will yet see many tests of the elasticity of this incredibly important document.

Who is the real source of the Constitution? The Lord states in the Doctrine and Covenants that the Constitution was established by Him and “by the hands of wise men whom [He] raised up [for] this very purpose”:

The laws and constitution of the people . . . I have suffered to be established, and should be maintained for the rights and protection of all flesh, according to just and holy principles; that every man may act in doctrine and principle pertaining to futurity, according to the moral agency which I have given unto him, that every man may be accountable for his own sins in the day of judgment. . . . And for this purpose have I established the Constitution of this land, by the hands of wise men whom I raised up unto this very purpose, and redeemed the land by the shedding of blood. (D&C 101:77,78,80.)

I have no doubt that the Constitution made it possible for the gospel to be restored some 40 years after it was accepted by this nation as the supreme law of the land.

But how or when will the Constitution falter? We have in the handwriting of Martha Jane Knowlton Coray and Larinda Pratt Weihe the following statement uttered by the Prophet Joseph on July 19, 1840, when he was just 34 years old (that’s 175 years ago today):

Eliza R. Snow said of this statement or of a similar statement:

I heard the prophet say, ‘The time will come when the government of these United States will be so nearly overthrown through its corruption, that the Constitution will hang as it were by a single hair, and the Latter-day Saints—the Elders of Israel—will step forward to its rescue and save it.’ (From Journal History, MSF 143 #28, July 24, 1871; see also “I Have a Question,” Ensign, June 1976.)

I was sitting in the Marriott Center on the BYU campus on September 16, 1986 and heard these words from the mouth of Ezra Taft Benson with my own ears:

It’s not my purpose to speculate how this will or could happen. My only hope is that by sharing sturdy and verifiable quotes and facts regarding the last times, readers will feel forearmed and better prepared for the second appearing of Jesus Christ.

But let me say this much: I feel strongly that the Constitution will suffer when the majority of voices in this nation cry out for iniquity. Let me close with these words of Mosiah, warning his people of a day to come:

If the time comes that the voice of the people doth choose iniquity, then is the time that the judgments of God will come upon you; yea, then is the time he will visit you with great destruction even as he has hitherto visited this land. (Mosiah 29:27.)

One thought on “Second Coming: The Constitution on the Brink of Ruin”