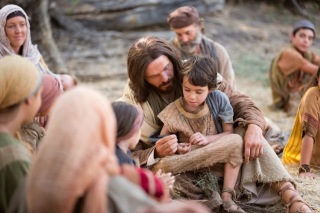 Not long ago, a friend told me a story about her 10-year-old daughter who, as she was going to bed one night, stubbed her toe on a rock that she’d picked up at the Salt Lake temple quarry a few months before. She realized at that moment that it had been a long time since she had offered a personal prayer. She knelt down right then, and while she prayed, she heard a voice in her mind speak her name, followed by these words, “Be humble.”

It was late, so she kept the experience to herself until the next afternoon when her mother had returned from work. She came into her mother’s office and sat down on the carpet. Then she asked her mom what the word humble meant. After a discussion, she came to the conclusion on her own that being humble means being like Jesus Christ.

Ever since I heard that story, I have been rolling it over in my mind and wondering myself about the meaning of the word humble.

To be humble, we must yield to the enticings of the Holy Spirit and be submissive to the Lord as a child is to her father:

For the natural man is an enemy to God, and has been from the fall of Adam, and will be, forever and ever, unless he yields to the enticings of the Holy Spirit, and putteth off the natural man and becometh a saint through the atonement of Christ the Lord, and becometh as a child, submissive, meek, humble, patient, full of love, willing to submit to all things which the Lord seeth fit to inflict upon him, even as a child doth submit to his father. (Mosiah 3:19.)

One thing I’d like to bring out is that we can and should be aware of our own humility. You hear some speakers say that as soon as you recognize that you are humble, you are not humble anymore; however, that does not hold up in scripture. Jesus recognized his own humility in this passage:

Come unto me, all ye that labour and are heavy laden, and I will give you rest. Take my yoke upon you, and learn of me; for I am meek and lowly in heart: and ye shall find rest unto your souls. For my yoke is easy, and my burden is light. (Matthew 11:28-30; emphasis added.)

If Jesus, our Great Exemplar, can recognize meekness and lowliness of heart in Himself, so can we. So should we. If we don’t see it in ourselves, how will we ever fully know we are as humble as we ought to be?

If we spent as much time examining ourselves as we do defending ourselves, we would be more humble. Self-defense is a common form of pride, and pride is the fruit of disdain, disdain for others and for God, and, in a sense, for ourselves.

Pride is a treason against self. When is a long night of sin not also preceded by the dusk of pride? Pride is a spiritual disease, a virus that lives in all of us and rages to a fever in a moment. We need to install the Lord’s anti-viral software: humility. Humility and gratitude are two solvents that dissolve pride.

Humility will enable us to get out of the Lord’s way so that He can hasten His own work.

I want to conclude my thought by sharing a very humbling experience from the life of Joseph Smith. Joseph and Emma were living in Harmony, Pennsylvania in 1828, near Emma’s parents home. Martin Harris visited them from Palmyra, New York,  and assisted Joseph with the translation of the Book of Mormon from April 12 of that year until June 14. Martin, who turned 45 years of age while staying with the Smiths that season, struggled with his doubts and begged the prophet to allow him to show the 116 pages of the translation to his wife, Lucy, and a few others.

Joseph inquired of the Lord through the interpreters, the Urim and Thummin, and was told no. Martin was not satisfied, and Joseph asked again. The answer again was no. Joseph pressed the Lord a third time and received an affirmative answer, but Joseph made Martin swear a solemn oath that he would only show the pages to five people.

Martin departed for New York with the manuscript in tow and thus began a very difficult season.

The next day, June 15, 1828, after a strenuous labor, Emma bore a baby boy, Alvin, named for Joseph’s older brother who had died. The baby died that same day. Emma was also near death after a  difficult delivery, and Joseph tended her night and day for two weeks. As Emma began to recover, she sensed Joseph’s anxiety and encouraged him to return to Manchester and find out what Martin was up to as they had not heard from him since his departure. Joseph took a stagecoach north.

After Joseph arrived in Manchester, the Smith family invited Martin to come to their home for breakfast at 8:00 o’clock in the morning. They did not see him ambling along the road until early that afternoon, eyes fixed on the ground, four and a half hours late. When he came to the gate in front of the Smith’s home, he did not enter it, but sat on the fence with his hat pulled down over his eyes.

Martin finally came into the house, but when he lifted his knife and fork to eat his very late breakfast, he immediately dropped them on the table, exclaiming, “I have lost my soul! I have lost my soul!” Joseph jumped to his feet and asked if Martin had broken his oath and brought them both under condemnation. He confirmed that he had and Joseph cried out, “All is lost!”

It turned out that Martin had kept the manuscript locked in his wife’s bureau. One day, a friend—not one of the five enumerated in the oath—visited the Harris home and wanted to see the pages. Lucy being out, Martin picked the lock of his wife’s bureau and damaged it. After making this compromise, Martin showed the manuscript to anyone who stopped in. Soon, the 116 pages of foolscap disappeared, never to be recovered.

Joseph paced the floors of his house that day, sobbing. He deeply regretted his actions and worried that the news of this loss would kill his ailing Emma. He was only 22 years old. (See Richard L. Bushman, Joseph Smith: Rough Stone Rolling [New York:Alfred A. Knopf], 66–69.)

What bitter fruit this season bore. Nevertheless, after being deeply humbled, Joseph and Martin recovered and went on with their lives. Joseph soon received a revelation, a stinging rebuke, now recorded as section 3 of the Doctrine and Covenants. The interpreters, which had been taken from Joseph, were finally returned on September 22, 1828. A year later, Martin was chosen as one of the three witnesses of the Book of Mormon plates and saw a glorious vision. The Book of Mormon was translated and published within two years and the Church was organized less than two weeks after that. After many trials, missteps and triumphs, both died true to the faith, Joseph in 1844 and Martin in 1875.

Whether we humble ourselves or are compelled to be humble, humility teaches us important lessons. It opens hearts and doors. It inspires gratitude, cures pride, and heals relationships. It is absolutely essential to all spiritual progress.

We would be wise to heed the counsel given to a young girl, “Be humble.”

Written as a devotional address given at the Publishing Services Department All-Hands Meeting, November 5, 2014. Following is the audio recording of that devotional.

2 thoughts on “She Heard the Words "Be Humble"”