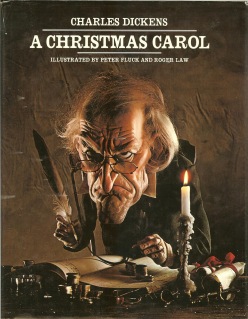 One of my all-time favorite novels is Charles Dicken’s A Christmas Carol. I have read this book many times. I just finished reading it again yesterday, Christmas afternoon.

Most of you are familiar with the story of the miserly, taciturn Ebeneezer Scrooge and his disdain for Christmas. He remains in his determined ardor until after an encounter with his business partner Jacob Marley, seven years dead, and the three spirits that haunt him into an ever clearer view of his life—the consequences of his choices and the destiny those choices might lead him to if he does not change his ways.

On our first Christmas after we were married, I received an edition of A Christmas Carol from my father that I have always loved. It is illustrated with photographs of richly detailed caricatures of scenes from the story. The caricatures were created by Peter Fluck and Roger Law.

There is probably nothing I enjoy more in literature or on film than watching a person change for the better. This is a common theme. Little else touches our hearts more than seeing a grumpy curmudgeon transformed to a repentant, humble lighthearted soul.

Isn’t that the hope of Christmas: The power to change for the better?

The first year I taught seminary, I struggled. I remember the last day we met that year—1984. It was just before the Christmas break. I was desperate. I wanted to get the kids’ attention. I wanted to leave them on a happy, hopeful note.

It came to me what to do. That morning I read to them from the last chapter (Stave Five) of A Christmas Carol. I was amazed as the whole class sat quietly in rapt attention.

When Scrooge awakes after seeing his name carved on a headstone, he undergoes a “mighty change of heart” (Mosiah 5:2). He hoops and hollers and dances about his bedchamber. He knows he’s been given another chance, and he is ebullient with gratitude and generosity.

He buys a prize turkey for the Cratchit’s and sends it to them by cab. He walks the streets of London, greeting all warmly. He goes to church. He finally goes to dinner at the home of his nephew Fred, stunning incredulous inmates and guests.

The story ends the next morning when Scrooge plays a hearty joke on his clerk Bob Cratchit. I repeat it here:

“He was early at the office next morning. Oh, he was early there. If he could only be there first, and catch Bob Cratchit coming late! That was the thing he had set his heart upon. And he did it; yes, he did! The clock struck nine. No Bob. A quarter past. No Bob. He was full eighteen minutes and a half behind his time. Scrooge sat with his door wide open, that he might see him come into the Tank.

“His hat was off, before he opened the door; his comforter too. He was on his stool in a jiffy, driving away with his pen, as if he were trying to overtake nine o’clock.

“‘Hallo!’ growled Scrooge, in his accustomed voice, as near as he could feign it. ‘What do you mean by coming here at this time of day?’

“‘It’s only once a year, sir,’ pleaded Bob, appearing from the Tank. ‘It shall not be repeated. I was making rather merry yesterday, sir.’

“‘Now, I’ll tell you what, my friend,’ said Scrooge, ‘I am not going to stand this sort of thing any longer. And therefore,’ he continued, leaping from his stool, and giving Bob such a dig in the waistcoat that he staggered back into the Tank again; ‘and therefore I am about to raise your salary!’
“Bob trembled, and got a little nearer to the ruler. He had a momentary idea of knocking Scrooge down with it, holding him, and calling to the people in the court for help and a strait-waistcoat.

“‘A merry Christmas, Bob!’ said Scrooge, with an earnestness that could not be mistaken, as he clapped him on the back. ‘A merrier Christmas, Bob, my good fellow, than I have given you for many a year! I’ll raise your salary, and endeavour to assist your struggling family, and we will discuss your affairs this very afternoon, over a Christmas bowl of smoking bishop, Bob! Make up the fires, and buy another coal-scuttle before you dot another i, Bob Cratchit!’

“Scrooge was better than his word. He did it all, and infinitely more; and to Tiny Tim, who did not die, he was a second father. He became as good a friend, as good a master, and as good a man, as the good old city knew, or any other good old city, town, or borough, in the good old world…and it was always said of him, that he knew how to keep Christmas well, if any man alive possessed the knowledge.

“May that be truly said of us, and all of us! And so, as Tiny Tim observed, God bless Us, Every One!”

So a Merry Christmas to all of you. I can keep it as well the day after Christmas, as well as Scrooge himself. God bless us all to do so, every one of us!